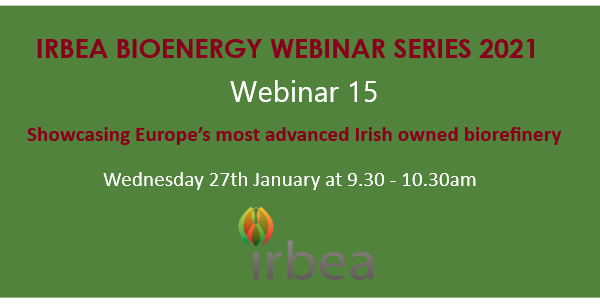 ClonBio Group Ltd: A snapshot of an Irish led company at the centre of the European bioeconomy: origins, path taken so far and future developments. ClonBio was founded in 2008, was operating a major biorefinery in Hungary by 2010 and has gone on to become Europe’s most dynamic bioeconomy investor.

View the live recording of the Presentation here

James is an industry and policy analyst at ClonBio Group Ltd.  He expertise is on EU climate, innovation and economic development policy. He is currently working to support the introduction of climate friendly E10 petrol in Ireland. He is a member of the Private Sector Mechanism of the UN Committee on Food Security. He represented the world Climate Ethanol Alliance as partner to the UNFCCC at COP24 in Katowice in 2018 and COP25 in Madrid in 2019. He has worked for the European Commission and its partners on innovation finance and innovation project development.

The Irish Bioenergy Association (IrBEA) met with Minister for Transport, Environment, Climate and Communication Networks, Eamon Ryan T.D. in recent days. The IrBEA representatives outlined the current work programme of the Association and priorities for 2021. At the meeting, Minister Ryan reaffirmed the Governments ambition to decarbonise the Irish Energy system by reducing emissions by 7% per annum surpassing EU targets.

Paddy Phelan, CEO of the Three Counties Energy Agency and President of IrBEA said “IrBEA members are identified as key to providing sustainable solutions to deliver this ambitious 7% target. The role of Bioenergy is clear in reducing emissions in agriculture, electricity, heat and transport. Bioenergy also supports rural development, rural enterprise and jobs and provides clean energy through local supply chains. Land use planning is crucial in the development of indigenous sustainable bioenergy resources from the existing forestry estate and opportunities for other measures such as agroforestry, energy crops and biogas to reduce emissions across the energy sectors”.

The impact of delays in the forestry licensing system was highlighted during the meeting. Timber, Energy and the growth of the Bioeconomy are all key deliverables of a thriving Forest sector.

Maurice Ryan, Director at Greenbelt and IrBEA Vice President said “the continuing delays in licensing from the Forest Service is severely impacting the forest sector. Forestry has huge potential and a very important role to play in supporting the agriculture industry in reducing our emissions. Forestry delivers timber, energy and for the bioeconomy. Forestry can promote biodiversity and land use improvement. These are mutually important topics and need to be part of future discussions.”

The failure to achieve 2020 renewable energy targets was acknowledgement at the meeting. It was noted that investing the 50 million euro fine paid by the Irish taxpayer for not achieving Renewable Heat target since 2010 would have been better invested over the years in Renewable Heat supports which promoted sustainable local biomass supply chains for supply of renewable fuel.

Seán Finan CEO of IrBEA said “Growth in Bioenergy needs to be recognised as one of the key climate actions to deliver sustainable clean energy for heat, transport and electricity that compliments jobs and enterprise through local value chains replacing imported fossil fuels.  Lack of supports historically for Bioenergy has resulted in failed renewable energy target delivery in Ireland.  In IrBEA, we will work with Minister Ryan, his department and SEAI to assist in the delivery of the challenging renewable energy targets for 2030 and always highlight the key role that Bioenergy has in this regard. Bioenergy has many socio-economic benefits locally and regionally which justify the need to invest in the required supports for Biomass, Biogas and Biofuels instead of buying the Renewable Energy credits from other EU members states”.

Paddy Phelan IrBEA President concluded “I was encouraged by the commitment from the Minister to the Climate Targets for 2030 and highlighting the role IrBEA members have in decarbonising the heat, electricity and transport sector in Ireland through increased use of Bioenergy including Biomass, Biogas and Biofuels. Lack of supports historically in heat and transport resulted in failed renewable heat target delivery in 2020.  The revised EU Emissions targets of 55% reduction by 2030 is key and IrBEA will be collaborating with the Minister, his Department and the SEAI in the development of the revised National Climate Action Plan in 2021.”

Notes to Editors:
The main items discussed at the meeting included: 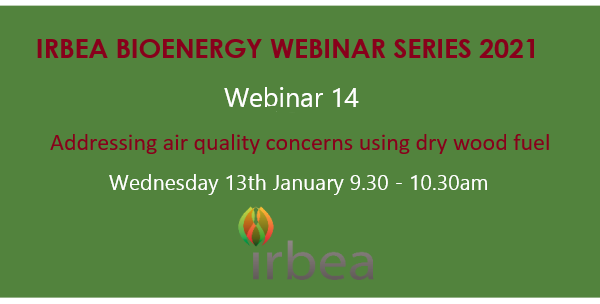 Recent concerns around domestic fireplaces and stoves and their impact on air quality have enhanced calls to ban smoky fuels and promote the use of dry wood fuel. This webinar focuses on presenting the IrBEA proposals to regulate wood fuels as a mechanism to eliminate wet wood from the marketplace to address air quality issues. This webinar gives stakeholders an opportunity to get a better understanding of the link between air quality and moisture content of wood. Air emissions can be dramatically reduced by using the correct fuel and by using properly designed Eco-design stoves.
View the live recording of Presentation here
https://www.irbea.org/wp-content/uploads/2021/01/Webinar-14-Banner.png 304 600 demoirbea2015 /wp-content/uploads/2015/10/irbea1-300x119.png demoirbea20152021-01-13 13:51:012021-01-18 10:55:29Webinar 14: Addressing Air Quality concerns using dry wood fuel 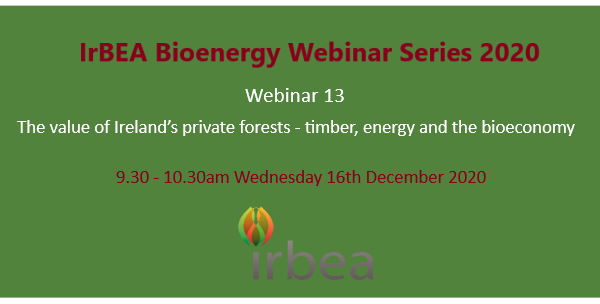 As Ireland’s private forestry assets continue to mature, their importance is increasing. The supply dynamics into the future see the balance shifting to a more even spread between Coillte and the private estate. This makes the current status within the Forest Service and the stalling of licence approvals being authorised even more critical and impacts future timber supply and overall confidence in the industry. Listen to Maurice Ryan from Greenbelt discuss the implications for his business.