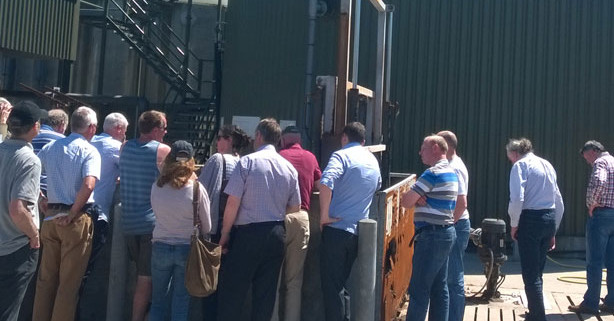 Sixteen people travelled from Ireland on the UK study tour at the end of June organised by IrBEA, including dairy farmers, contractors, food processors, biogas plant builders and others. Day two of the tour was at the UK ADBA (Anaerobic Digestion and Bioresources Association) Trade Show, the big annual flagship event in the UK for biogas.

Installing an anaerobic digester to produce biogas has radically transformed the farming system and financial viability of an extended-family farm partnership in Devon. The Parish family put in three robot milkers, switched to zero grazing and began farming energy and heat (for the chicken houses) to complement their milk and chicken meat output. The changeover has bounced them from a situation where the farm future was under pressure to support the extended family, to stronger revenues and profit and new plans for investment and expansion.

Steve Parish farms alongside his father, uncle and cousin. Steve is mainly responsible for the dairy herd while his cousin looks after the poultry side of the farm. His father and uncle are semi-retired. The farm comprises of 160 dairy cows, 30,000 chickens and a biogas plant. The land produces 150 acres of grass silage, 150 acres of maize silage and 200 acres of cereals each year.

A few years ago when Steve’s father and uncle moved towards retirement the decision was made to install three robot milkers. This allows greater labour flexibility as only one person needs to be present on the farm at all times.

They plan to install a draft gate on the milkers to allow older and lame cows out to graze paddocks close to the farm yard. Although the average life expectancy of the cows has dropped by two years due to housing, during the lifetime of the animal they get around the same total milk yield. The big plus is in easier management of the cows indoors with the robot system.

The Parishes installed a 700m3 anaerobic digester in 2012, which runs on cow slurry, dairy washings, maize silage and chicken litter. Each day they feed in to the digester 2 tonnes of maize silage and 2 tonnes of chicken litter, done by manual feeding twice per day. The digester runs at 42ᵒC and produces 850m3 of biogas per day – the equivalent of 500 litres of diesel – and this powers an 80kW (circa 100hp) electricity generator.

They sell the electricity into the grid for 19p/kwh (23c/kWh). The digester is big enough to produce double the amount of gas, however they do not have enough feedstock for it. Recently a neighbour was short of maize silage and offered to purchase some from Steve at £30/tonne, but when the figures were done he found he would have to get £80 per tonne to offset the reduced gas production.

The finished material (called Digestate) is put through a separator, the solid portion is spread on maize ground while the liquid portion is used for the 150 acres of grass silage (3 cuts). The digestate alone is sufficient for all the fertiliser needs of the grass silage – they do not apply any other fertilizer. The digestate is stored in a large over-ground covered tank; the cover is important to keep nitrogen in and maximise its nutrient value. It also allows further gas collection and keeps the rain out.

Steve wishes that they had built a larger store for digestate – normally they have to start spreading in February and as a result do not get the full value of the nitrogen as it’s a bit early. With a larger covered store they could get to April and maximise its value. The digestate is injected into the soil and Steve reckons any misses in the field are very noticeable.

The digester produces 30 tonnes of solids and 100,000 gallons of liquid digestate per week.
The generator is key to profitability. The engine is running 24/7, akin to driving your car 650,000 miles every year. Every day the generator produces £360 worth of electricity, so keeping it running is important. They opted for a lower priced generator, but now spend £20,000 on engine maintenance per year. Oil and spark plugs are changed every 2 weeks and the engine head is changed every 6 months. The plant is expected to pay back over 10 years, and delivers a wage at the same time.

Next year the Parishes plan to use the heat from the digester by installing a dryer to dry grain and woodchip. They aim to be eligible for payments from the UK Renewable Heat Incentive (RHI) scheme, which will provide a valuable 15-year income stream and therefore a short pay-back period for the investment.
Much Frawley, Hereford

The Farm comprises of a 300 cow dairy herd, robotic milking and all year housing, plus two 1600m3 digesters, only one is fully operational as the farm is limited by electricity grid capacity to only 350kw, at full load the plants could produce a combined 500kw.

The digester is fed with Slurry, maize, grass silage, apple pomace from Weston’s cider and chicken litter. In summer his feedstock is supplemented by considerable quantities of soft fruit, raspberries, and strawberries from polytunnel farming. He also mixing potatoes, sugar beet, and silage to soften feedstock. Grass silage, sugar beet and potatoes are often used as supplementary feeds. All feedstock is mixed in a Treloguet mixer before being fed into the digester at a rate of 7 tonnes per day.

Want to join the discussion?
Feel free to contribute!