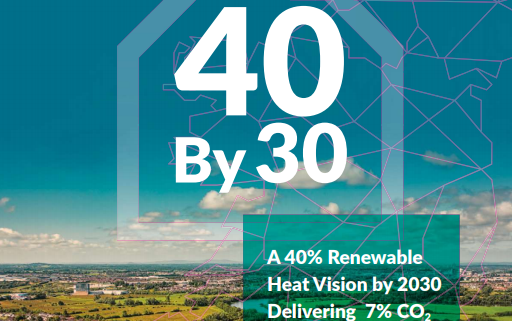 After over a year’s work, the Renewable Energy Ireland (REI) Renewable Heat Plan, 40by30, a roadmap to an Ireland where 40 per cent of our heat can come from renewables by 2030, has been published today.  This report has been developed by XD consulting on behalf of Renewable Energy Ireland. IrBEA are one of the main sponsors of the report and has acted in an administrative role on behalf of Renewable Energy Ireland for the development of this report. This Renewable Heat Plan will assist our lobbying efforts to encourage Minister Ryan and his department officials to adopt an ambitious 40% targets for renewable heat in the upcoming revision of the Climate Action Plan similar to the way the 70/30 report resulted in an ambitious target for the renewable electricity sector. There is a place for all renewable technologies and resources to be deployed in achieving this target. There is a particularly strong role for Bioenergy including solid biomass and biogas / biomethane given that bioenergy heating solutions can be deployed across all sectors and all temperature ranges. If you have any feedback and comments on the report or would like to discuss any aspect of it further please do not hesitate to get in touch with Seán Finan IrBEA CEO seanfinan@irbea.org

Renewable Energy Ireland (REI) publishes today 40by30, a roadmap to an Ireland where 40 per cent of our heat can come from renewables by 2030. This would reduce our CO2 emissions by 7 per cent annually in line with the Climate Action Bill.

This plan was developed by XD Consulting on behalf of REI and with the expert advice of organisations working in district heating, bioenergy, heat pumps, renewable gas and geothermal.

The plan clearly shows that 40 per cent of Ireland’s heat can be provided by renewable sources primarily from bioenergy, heat pumps, renewable gas and district heating networks. There is no single solution to decarbonising our heating system but we can heat our homes, schools, hospitals and businesses using a combination of several different heating technologies.

Speaking at the launch of the plan Dr Tanya Harrington, Chairperson of REI, said:
“This plan shows how the renewable heat industry can play our part in delivering the ambition of a 7 per cent reduction in our CO2 emissions. This report is an agreed vision from across our industry and a call to action for the Government to set an ambitious 40 per cent renewable heat target by 2030 in the revised Climate Action Plan.”

The report identifies a large number of urgent policy interventions required from Government and industry to deliver 40by30 including:

Report Author, Xavier Dubuisson of XD Consulting, said:
“The 40by30 report provides decision-makers at national and local level a roadmap on how we can heat our homes, businesses, hospitals and industrial processes using Ireland’s vast renewable energy resources, and have a big impact on our climate challenge. The analysis we’ve conducted demonstrates that we can meet 40% of heat demand with renewable energy cost-effectively, making a direct contribution to Ireland’s 7% annual target in greenhouse gas emissions reduction, and creating 23,000 new permanent, fulltime jobs over this decade.”

Donna Gartland, CEO of the District Energy Association (IrDEA) said:
“This heat plan is the first of its kind in Ireland, bringing together all of the key industries in the Irish renewable heat sector and providing much needed input to the Government’s new ambitious CO2 targets for 2030. Based on the detailed cost-benefit analysis conducted, the findings highlight the key role district heating can play in decarbonising heat in Ireland, allowing us to deliver all types of large-scale renewable and low-carbon heat through the network with few or no changes required from the consumer.

“The reports shows district heating can provide 10 per cent of Ireland’s heating needs by 2030, meaning a rollout of district heating connecting 1% of the heat market per year, a target that has been achieved by climate leading countries in Europe since the 1960s.”

Paddy Phelan, President of the Irish Bioenergy Association (IrBEA) said:
“We are delighted to support the development of this vision for the renewable heat sector by Renewable Energy Ireland and its members across all of the renewable sectors and technologies. Bioenergy, including solid biomass and biogas/biomethane, as an indigenous, locally sourced, dispatchable energy source can deliver large emissions reductions across each heat sector and temperature range in Ireland.

“This plan sets a new vision and a clear pathway for how the Irish Government can deliver a 40% renewable heat target by 2030 while at the same time achieving the 7% carbon emissions per annum reductions.

“I call on Minister Ryan and the Government to adopt the 40by30 Renewable Heat Plan in the upcoming revision of the Climate Action Plan and to ramp up the supports for bioenergy to transition the heat sector away from fossil fuels such as imported gas and oil to deliver significant emissions reductions through widespread deployment of bioenergy”.

PJ Mc Carthy, CEO of Renewable Gas Forum Ireland (RGFI) said:
“On behalf of members in the agri-food, beverages and biopharma industries as well as developers and shippers,  RGFI  was pleased to contribute to this wider partnership of sustainable energy associations and its shared vision.  This collaborative approach is the only way to achieve the 7% annual  CO2 reduction  and will, we hope, be supported by Government . RGFI is already pursuing some of the measures and policy recommendations identified, such as the early implementation of Article 23 REDII . We are advocating and supporting consumer and sector led initiatives to decarbonise industrial heat demand requirements, with an independent business case for AD biomethane production, which also benefits the environment and rural economy.

“However,  a just energy transition in Ireland requires a range of approaches and affordability. Renewable gas (biomethane and BioLPG) plays an important role both on and off the gas grid, alongside other renewable heat technologies. Over 500,000 Irish properties have no connection to the natural gas distribution network; two-thirds currently rely on oil boilers for heating and fuel. BioLPG as a drop-in fuel, delivers up to 90% certified carbon emission savings compared to conventional fossil fuels.”

About Renewable Energy Ireland;
This report is the result of a study commissioned by Renewable Energy Ireland (REI). REI was established in January 2019 as an open partnership of sustainable energy associations working collectively to support the energy transition in Ireland. The shared vision is that by 2050 Ireland will be energy independent through using indigenous, clean, carbon-free renewable energy supported by, and supporting, communities across our country. Further details of the work of REI can be found at: https://renewableenergyireland.ie/

Hitting the target would reduce Ireland’s dependency on total energy imports from 50% to 34%.